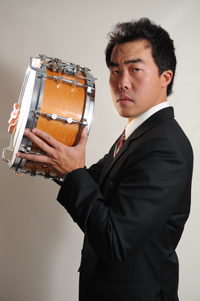 A recipient of The Cloyd Duff Scholarship, Shin received a bachelor's degree at the Cleveland Institute of Music as a student of Richard Weiner and Paul Yancich. Upon graduation, Shin was awarded the Bruce Collie Award for percussion excellence at the Cleveland Institute of Music. He went on to pursue graduate studies at The Juilliard School with Greg Zuber. As a student, Shin participated in the Tanglewood Music Center, Spoleto Festival USA, Music Academy of the West, National Repertory Orchestra, Aspen Music Festival and National Orchestral Institute.

Shin is a faculty member at the University of Maryland School of Music and a performing artist and clinician for Yamaha Musical Instruments, Zildjian Cymbals, Grover Pro Percussion, Innovative Percussion and Remo Drumheads.