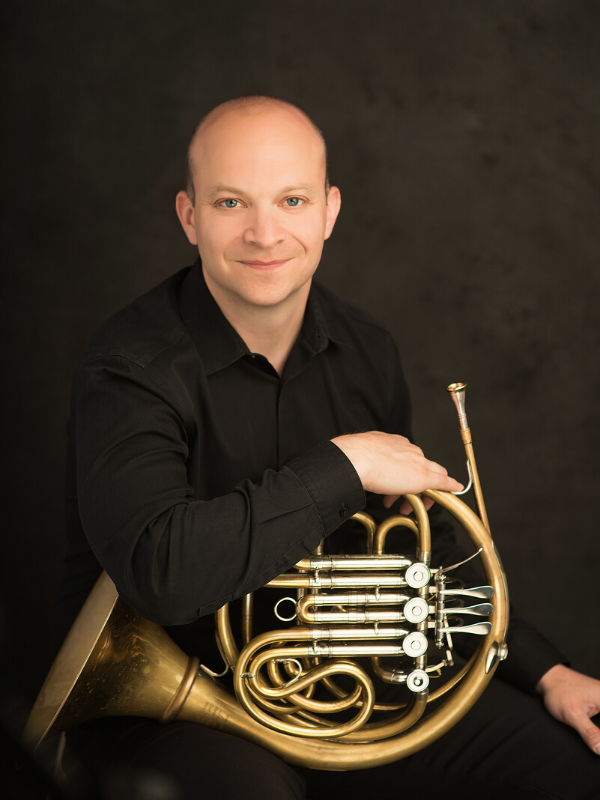 Dr. Justin Drew is Lecturer of Horn at the University of Maryland School of Music where he teaches undergraduate horn lessons, coaches brass chamber groups, and serves as the director of the University of Maryland Horn Choir. A busy freelance performer, he serves as the solo horn for Arena Stage, Third Horn of the National Philharmonic, Principal Horn of the Gourmet Symphony, Second Horn of the Apollo Orchestra, and appears frequently with the Baltimore Symphony Orchestra and the Maryland Symphony Orchestra. He has also performed with the National Symphony Orchestra and numerous groups up and down the East Coast. Dr. Drew serves on faculty for the Maryland Classic Youth Orchestras, Potomac Valley Youth Orchestras, and the Washington Brass Institute Summer Boot Camp.

Dr. Drew also has extensive experience performing with Chamber Music groups. He has recently performed with Barclay Brass, one of DC’s up-and-coming brass ensembles. From 2012 to 2018, he regularly toured across the U.S. with the Rodney Marsalis Philadelphia Big Brass. In July 2015, he served as the hornist for a brass quintet residency held at the University of Maine. He has also performed with Boston Brass, Carolina Brass, and he has joined many quintets with premiere military musicians in the DC area. In 2007, Drew performed with the legendary late oboist Ray Still and musicians of the “President’s Own” Marine Band in a performance of Mozart’s Piano Quintet in Eb.  He has also appeared in chamber performances on the Kennedy Center’s Millennium Stage and at the Strathmore Mansion.

Dr. Drew can be heard on four albums. His first solo album, The Corno D’amore, will be released Fall 2019 under the label Arts Laureate. In March 2016, he recorded the album Journeys with the United States Air Force Band. In January 2014, he joined the Grammy-nominated Inscape Chamber Orchestra to record their second album, American Aggregate on the label Sono Luminus. As a result of being a finalist with the West Point Band in 2012, he performed as 4th horn on their first recording project in HD surround sound under the multi Grammy Award-winning label Reference Recordings.

Dr. Drew is a dedicated teacher with over 17 years of experience. In addition to his duties at the University of Maryland, he has an advanced private teaching studio based in Potomac, MD. Prior to joining the faculty at UMD, he served as adjunct faculty for University of Maryland Baltimore County for five years. His principal teachers include Gregory Miller, Denise Tryon, Suzanne Gonsalves, and Wanda Whitener. He has also been highly influenced by studies with William VerMeulen, James Ross, Eric Ruske, and Phil Munds.

A native of Scarborough, ME, Dr. Drew grew up in a family influenced by music. He began his musical studies on the trumpet, and performed at the Annual Key Bank Jazz Festival with notables such as Dave Brubeck, Cleo Laine and Wynton Marsalis. Although jazz trumpet was a passion of his, he decided to make French Horn his focus mid-way through completing a Bachelor of Music degree at the University of Maine. He received his Master’s in Music Performance in 2007 and his D.M.A. in Music Performance in 2019 from the University of Maryland.

Dr. Drew lives in Washington, DC with his wife, Katie, and their dog, Sophie.

For more information, you can visit Dr. Drew’s website at www.justindrewhorn.com.

The works on this album are a series of four Baroque transcriptions for horn and organ. Drew's intention in transcribing and recording these works was to add to the horn repertoire, giving the greater horn community access to new Baroque solo literature. Two transcriptions (Marcello and Albinoni) were taken from oboe concertos and two (J.S. Bach and Telemann) from oboe d’amore concertos. All of these works were originally accompanied with small string ensemble and continuo. Drew chose music originally composed for oboe and oboe d’amore because the melodies were both beautiful and accessible for the modern-day horn player. These melodies also embody four different types of Baroque style and melodic mastery. The organ was chosen to accompany the horn because it is an instrument that was prominent to the period in which these works were written. This pairing of the organ with horn provides a sense of historical balance; the horn, as a modern instrument, reflects the present, while the organ honors the past.