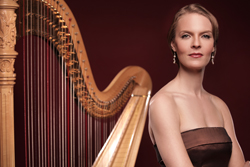 Ms. Fuller is an active chamber musician and frequently performs with her flute, viola and harp trio, Trio Cloisonnè, on series such as the Chamber Music by Candlelight in Baltimore and the Baltimore Symphony’s chamber music series in Frederick, MD. She is also a member of the notable Philadelphia contemporary ensemble, Network for New Music, and has recently been featured on a recording of the works of Bernard Rands with members of the group. In January, 2009, Ms. Fuller was the solo artist on an evening of harp music for the Delaware Symphony's Champagne Chamber Music Series, which was broadcast on Philadelphia's NPR station WHYY.

Ms. Fuller holds a master’s degree in music from Indiana University and studied at the New England Conservatory and the Royal Conservatory of Music’s Glenn Gould School for her bachelor’s degree. Her teachers have included Judy Loman of the Toronto Symphony, Anne Hobson Pilot of the Boston Symphony, Nancy Allen of the New York Philharmonic, Alice Chalifoux of the Cleveland Orchestra, and distinguished professor at Indiana University, Susann McDonald.

Ms. Fuller is a former faculty member of the Settlement Music School in Philadelphia was also the assistant director from 2006-2009 for the Saratoga Harp Colony, an advanced training ground for the world’s next generation of professional harpists that was founded by the Philadelphia Orchestra’s principal harpist, Elizabeth Hainen.