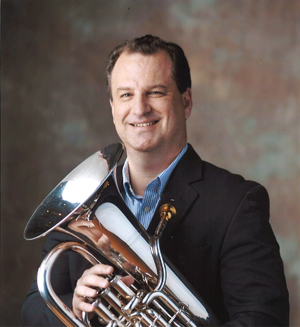 Steve Kellner was appointed UMD’s lecturer in euphonium in September 2005. In addition to teaching the euphonium studio, he is also director of the UM Tuba-Euphonium Ensemble. Steve retired in October 2004 after a 25 year career in military bands, including eleven years as principal euphonium of the U.S. Marine Band in Washington, D.C. In addition to hundreds of performances with the band at the White House and in support of the President, he was a featured soloist on several of the band’s national concert tours, summer series concerts, and chamber series concerts, and served as principal euphonium on the band’s tours of Norway, England, the Soviet Union, and Switzerland. He also played on more than fifteen Marine Band recordings and was a featured soloist on the band’s recording Charles Ives’s America. Guest conductors of the band during Steve’s career included Frederick Fennell, Gunther Schuller, Osmo Vanska, Leonard Slatkin, and John Williams.

In addition to his performances with the Marine Band, Steve has been a guest soloist at the Texas Bandmaster’s Association Convention, the All-Eastern Band Clinic, and the U.S. Army Tuba-Euphonium Conference. He has premiered numerous new works for the euphonium, including works by Stephen Bulla and Douglas Court, and presented master classes and clinics at colleges and universities across the country, including the Eastman School of Music, Arizona State University, Brigham Young University, and the Armed Forces School of Music. He has also performed as an orchestral euphoniumist with the National Symphony Orchestra, the Maryland Symphony, the Chesapeake Orchestra, the Oklahoma City Metropolitan Orchestra, and the Arlington Symphony, and has performed and recorded with the Washington Symphonic Brass.

A native of Atlanta, Steve received nearly all of his early musical training in Salvation Army brass bands. He has served as principal euphonium of several S.A. brass bands and performed on numerous brass band recordings, including appearances as a featured soloist on the CD recordings Songs of the States with the National Capital Band, and Live in England with the Southern Territorial Band. Steve’s euphonium teachers include Robert Schramm, Mark Mordue, and Michael Moore and his trombone teachers include Milt Stevens, Matt Guilford, and James Kraft.

In addition to teaching at Maryland, Steve is also adjunct professor of euphonium at the Peabody Conservatory, where in 2000 he was the first professional euphoniumist to be appointed a faculty member at a major U.S. conservatory. He is the founder and director of both the Peabody Tuba-Euphonium Ensemble and the Peabody British Brass Band.

Steve resides in Bowie, Maryland with his wife, Janine, and the youngest of their three children, Jessica.