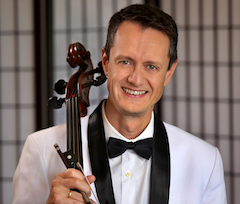 Cellist Eric Kutz has captivated audiences across North America, Asia, and Europe.  His diverse collaborations cut across musical styles, and have ranged from cellist Yo-Yo Ma to jazz great Ornette Coleman. He is active as a teacher, a chamber musician, an orchestral musician, and a concerto soloist.

Mr. Kutz came to the University of Maryland School of Music in 2015, where he holds the Barbara K. Steppel Memorial Faculty Fellowship in cello.  Previously he was a professor at Luther College, where he served on the faculty from 2002-2015, and prior to that, Mr. Kutz was the cellist of the Chester String Quartet for four years.  The Quartet, called “one of the best and brightest of the country’s young string quartets” by the Boston Globe, was in residence at Indiana University South Bend.  The Quartet gave two tours of Europe during Kutz’s tenure, and performed from coast to coast.

Mr. Kutz is a founding member of the Murasaki Duo, a cello and piano ensemble that celebrated its 20th anniversary in 2016.  The following year it gave its second European tour.  Advocates for new music, the Duo actively commissions new works, in addition to performing the classics. Hailed by New York Concert Review as having “an easy virtuosity, and an unusually high level of ensemble playing,” after its Carnegie Hall debut, the Duo regularly performs on chamber music series throughout the nation.

The Duo’s second CD, “Duo Virtuoso,” was released on the Delos label in 2015, and was lauded by American Record Guide as “an interesting program, played to the hilt by both parties.  These are two outstanding musicians.”  The disc won the Violoncello Foundation’s 2016 Listeners’ Choice Award, chosen from among all cello CD’s released the previous year.  The Duo’s debut compact disc appeared on the Centaur Records label; this disc was hailed by the Journal of the Atlanta Audio Society as “ebullient” and “brilliant throughout.” The Murasaki Duo’s most recent recording, released in 2017, features the complete cello/piano music of American composer Maria Newman.

As an orchestral musician, Mr. Kutz summers in Chicago as a member of the Grant Park Orchestra’s cello section. He has also appeared in the section of the National Symphony, the New York Philharmonic, the Minnesota Orchestra, and the Saint Paul Chamber Orchestra. He has been principal cellist of the Houston Grand Opera Orchestra and the Juilliard Orchestra, and he has performed under the batons of Sir Georg Solti, Kurt Masur, and Seiji Ozawa, among many others.

In 1997 Mr. Kutz traveled to the Tchaikovsky Conservatory in Moscow as a visiting artist, performing new chamber works by American composers. Other performance highlights include a tour of Germany and a concert in New York’s Avery Fisher Hall as part of Lincoln Center’s Mozart Bicentennial celebration. Mr. Kutz has premiered over two-dozen works, and has been broadcast live on WQXR and WNYC, both of New York City, WFMT Chicago, as well as nationally on PBS television’s Live from Lincoln Center.

Mr. Kutz holds degrees from the Juilliard School and Rice University. He performs on a cello by Raffaele Fiorini (Bologna, 1877), and a bow by François Voirin (Paris, 1880).