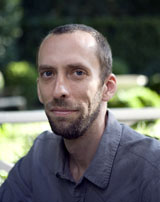 Originally from Chicago, Richard Barber began his musical studies with piano at age seven, adding double bass at age nine. He studied privately with bassists from the Chicago Lyric Opera, and in high school, the Chicago Symphony Orchestra. Although he had strong interest in science and engineering, Mr. Barber found himself unable to choose any career except music. He attended the Peabody Conservatory in Baltimore, where he studied with Harold Robinson, currently principal bass of the Philadelphia Orchestra, and additionally with Tim Cobb, currently principal bass of the Metropolitan Opera Orchestra. Summers were spent touring Europe with the Schleswig-Holstein Festival Orchestra. Receiving his degree in three years, he won his first professional orchestral audition two weeks after graduation, and joined the bass section of the Phoenix Symphony Orchestra. In 1995, after three years in Phoenix, Mr. Barber auditioned for, and was appointed to, the bass section of the National Symphony Orchestra. Seven months later, he was selected at another national audition, and appointed Assistant Principal Bass.

He has performed extensively throughout the United States, Europe, Japan, and China with the National Symphony Orchestra, the Schleswig Holstein Musik Festival Orchestra (Germany), and the Grand Teton Festival Orchestra (Wyoming), under conductors such as Lorin Maazel, Christoph Eschenbach, Sir George Solti, Valery Gergiev, Christoph von Dohnanyi, Kurt Masur, and Ivan Fischer. In Washington, he appears regularly with the 21st Century Consort, the Eclipse Chamber Orchestra, and the Fessenden Ensemble.

Mr. Barber was born into a family of musicians and educators. His father performed professionally, while also acting as chairman of the music department of a high school of 5,000 students. His mother taught flute privately and continues to sing professionally. His sister, a teacher, is an avid musician. Mr. Barber plays an Italian instrument made c. 1620 by the Brescian master Giovanni Paolo Maggini. He lives in Maryland with his wife, mezzo-soprano Marta Kirilloff Barber, and their two children.