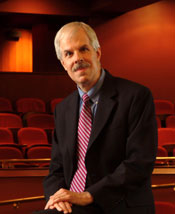 1110B The Clarice Smith Performing Arts Center
Get Directions

Mr. Gibson has been a composer member of the Contemporary Music Forum of Washington, DC (1987–2000), and he is also active as a performer of new music. As a jazz bassist and composer he has appeared leading his own groups and, during the early 80’s, as a sideman with internationally recognized artists including Mose Allison, Bob Berg, Marc Copland, Tom Harrell, Eddie Harris, and Barney Kessel.

Among Mr. Gibson’s compositions are Offrande for string quartet, Concerto for Double Bass and Chamber Orchestra, A Sound Within for piano solo, and numerous works for various chamber ensembles. His compositions have been performed throughout the United States, including concerts at the Bowling Green 21st Annual New Music and Arts Festival and the national conferences of The College Music Society, The National Flute Association, and Society of Composers, Inc. Mr. Gibson’s works have also been presented on National Public Radio and in Europe, South America and China. Noted artists and ensembles who have performed his works include bassists Bertram Turetzky and David Walter, clarinetist Esther Lamneck, the Meridian String Quartet, the Clarion Wind Quintet, the Contemporary Music Forum, the 20th Century Consort, and The National Symphony Bass Quartet, who commissioned his composition Soundings (2001). His large orchestra work Through the Ear of a Raindrop, written for the inaugural season of the Clarice Smith Performing Arts Center at Maryland was premiered by the University of Maryland Symphony Orchestra and conductor James Ross in May 2002.

Mr. Gibson’s awards in composition include seven Creative and Performing Arts Awards from the University of Maryland, the Artist Fellowship in Music (1982) and an Individual Artist Award (1993) from the Maryland State Arts Council, and a Community Engagement Grant from the American Composers Forum (1999).

Since 1985 he has worked with computer music systems, and his electronic works have been performed at national and international conferences and festivals, including The Society for Electro–Acoustic Music in the United States national conferences and the Sonic Circuits Electronic Music Festival. His music for film and television includes a documentary score for the National Geographic Explorer series. Mr. Gibson’s compositions have been recorded on Golden Crest (The American Music Project, Clarion Wind Quintet, 1979) and Spectrum Records (Soundscapes, 1982; Music of Robert Gibson, 1986). Chamber Music, a Capstone compact disc of chamber works by Mr. Gibson appears on Fanfare magazine’s 1996 "Want List" as one of critic William Zagorski’s five notable recordings of the year.