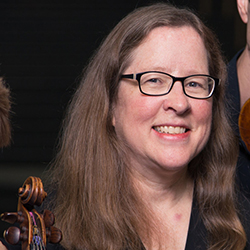 Violinist Sally McLain received her Bachelor of Music and Master of Music degrees with High Distinction from Indiana University, where she studied with and was assistant to James Buswell. She has participated in the Tanglewood Music Center, the Bach Aria Festival and Institute and the New York String Orchestra Seminar, under the direction of Alexander Schneider. She served as concertmaster of the Washington Chamber Symphony for ten seasons and is currently concertmaster of the Washington Concert Opera and the Washington Ballet.

Ms. McLain was a long-time member of the Theater Chamber Players, under the direction of co-founders Leon Fleischer and Dina Koston. She is a founding member of the Left Bank Quartet, which originated as an ensemble in the Theater Chamber Players. Compositions written for and premiered by the quartet include Mark Wilson's Time Variations, (Capstone Records) and String Quartet No. 4 by Lawrence Moss, (Innova Recordings). Gramophone Magazine's review of the Moss stated it was "played by the Left Bank Quartet with brilliant focus and timbral variety."

Ms. McLain was also a member of the Potomac String Quartet, which has recorded the complete quartets of David Diamond and Quincy Porter for Albany Records. Of these cycles American Record Guide wrote, "The admirable Potomac Quartet has done a great service for American chamber music in recording the complete quartets of both Porter and Diamond. These superb musicians play with sensitivity, lustrous tone, and the joy of discovery". Additionally, she is a member of the Third Millennium Ensemble, and other chamber groups she has appeared with include the National Musical Arts, Post-Classical Ensemble, Smithsonian Chamber Music Society and U.S. Holocaust Museum Chamber Series.

She is an adjunct chamber music lecturer at the University of Maryland and is on the faculty of the Gettysburg Chamber Music Workshop and the Raphael Trio Chamber Music Workshop. Critically hailed as a "violinist with lots of style" (Washington Post), Ms. McLain has performed as soloist to critical acclaim in a variety of venues that include the Clarice Smith Center Gildenhorn Hall, Kennedy Center Terrace Theater, Library of Congress, Lisner Auditorium, National Gallery of Art and Smithsonian American Art Museum. She was honored to give the premiere performance of "Solo for Violin - Homage to Béla Bartók", written for her by Dina Koston. Ms. McLain plays on a violin made by Vincenzo Postiglione circa 1888.