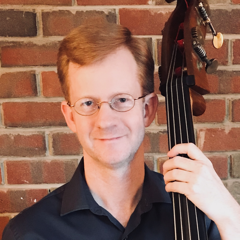 Jazz bassist, educator and composer Tom Baldwin has been one of the most in-demand musicians in the Washington, D.C. metropolitan area for 30 years. Baldwin has taught at the University of Maryland since 1996, and appears on over 50 CDs as a side man. He has been lauded for his “impeccable intonation and accuracy” (Vic Juris), “incredible beat” (“Tootie” Heath), “superb musical instincts” and “phenomenal consistency” (A.J. Collins).

Some of Baldwin’s more notable recordings include his self-produced "Glom On To This," which features all original compositions and arrangements. Steve Herberman’s Ideals from 2009 resided on the Jazzweek national airplay chart for 28 weeks and peaked at number 10. Tony Martucci’s "Life In Hand" features pianist Marc Copland, three of Tom’s compositions and was voted by the Washington Post among the best of 2011. Two more Baldwin originals appear on 2014’s "Angel Eyes" by the Grammy winning Afro Bop Alliance. More recently, a series of performances with Dutch pianist Peter Beets culminated with the 2019 release "Our Love Is Here To Stay" and a tour of Holland.

Baldwin teaches jazz bass and coaches jazz combos at the University of Maryland, where his arrangements are often performed by his student groups. He is also a frequent faculty member at Maryland Summer Jazz camps, and a clinician/adjudicator for regional festivals and workshops. For more information, visit https://tombaldwinbass.com/home and https://www.youtube.com/channel/UC7L1l5sOfacZuh9cUTfuLdw