An Afternoon Zoom With Yo-Yo Ma

May 18, 2021 School of Music | College of Arts and Humanities | The Clarice Smith Performing Arts Center 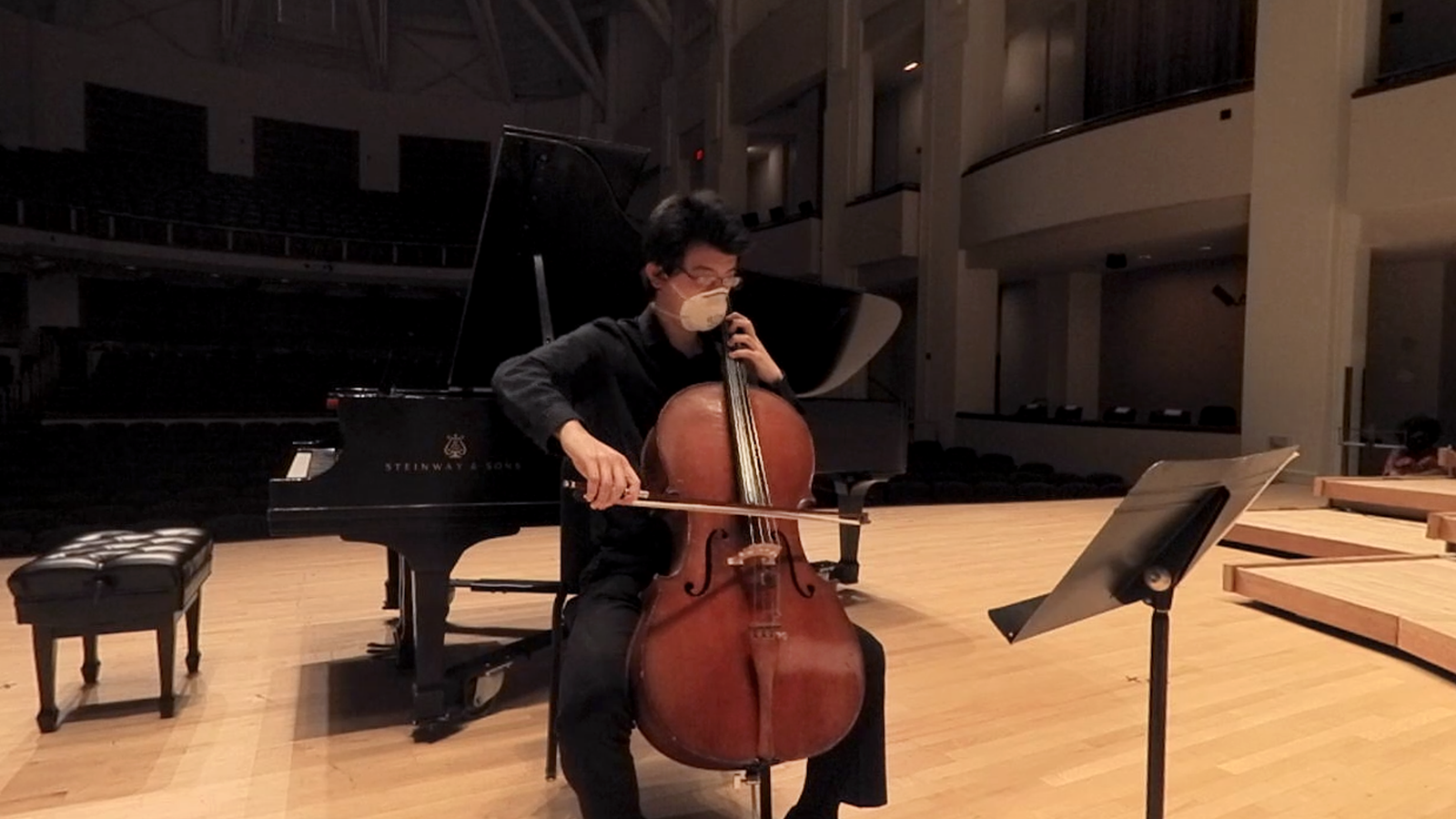 Music student reflects on masterclass with the international cello virtuoso.

Music and computer science double major Michael Li ’22 has gotten used to having class on Zoom since the pandemic began. But on a Tuesday afternoon last month, Li logged onto his cello studio class to find none other than world renowned cellist Yo-Yo Ma.

Li was among three cello students—and the only undergraduate—selected by members of the string faculty to play for the famous cellist, whose accolades include over 100 albums, 18 Grammy Awards, the Presidential Medal of Freedom and performances for nine U.S. presidents, including the recent inauguration of President Biden.

“The entire experience was amazing and a bit surreal,” said Li. “It isn’t everyday that you receive feedback from your role model.”

While the COVID-19 pandemic has made practicing and performing in person more challenging, it has also provided opportunities for performing arts students to learn from visiting artists in a virtual environment.

Associate Professor of Cello Eric Kutz had the idea to invite Ma while reflecting on what might be a meaningful capstone experience during such a difficult year.

Almost 30 years ago Kutz performed in a masterclass for Ma at the Tanglewood Music Center, an annual summer music academy in Lenox, Massachusetts.

“The encouragement and inspiration Ma gave were a pivotal point in my journey as a musician,” he said.

School of Music Director Gregory Miller said the widespread acceptance of video conferencing technology has made it possible for students to learn from artists and scholars from across the country—and the world.

“Before the COVID-19 pandemic, who would have imagined that Yo-Yo Ma would join our cello class virtually?” Miller said. “The quick adoption of technology accelerated by the pandemic made this amazing opportunity for our students possible. It reminds us that there are new avenues for resiliency, even in difficult times.”

During the 90-minute masterclass, Ma joined from his home in Cambridge, Massachusetts, and five students joined from the Dekelboum Concert Hall at The Clarice. One of the hundreds of Zoom Q2N-4K video recorders provided by UMD and SOM to prepare music majors for this year’s hybrid learning environment was used as a webcam and microphone to stream the performers in high quality video and audio. They wore masks and played socially distanced. The rest of the class was virtual.

Li chose to pre-record his performance of the Cadenza of Shostakovich’s Concerto No. 1 so that internet latency wouldn’t be an issue during the masterclass. After practicing for hours, Li recorded two takes and submitted his favorite to be critiqued by Ma.

After the class watched Li’s video submission, Ma congratulated the student on his playing. He then gave feedback and asked questions to help Li deepen his understanding of the piece and its emotional power.

“When we play something hard, sometimes we rush through,” Ma said. “Be careful of that.”

Ma also suggested using “empathetic advocacy” to make the music become explosively powerful—“completely [identifying] with the music, personal things, personal conflicts, something that you lived through” in order to feel more deeply, he said.

After receiving feedback, Li played sections of the piece live to apply the suggestions.

Li said the exchange shed new light on his playing and the importance of focusing on the big picture instead of getting stuck on individual notes. He plans to further apply this feedback as he prepares the piece for the UMD Symphony Orchestra concerto competition next academic year.

“Ma’s positive and encouraging reaction to my performance video was a moment that I will never forget,” Li said.

Learn more about the string division on the School of Music website.