October 21, 2021 College of Arts and Humanities | School of Music 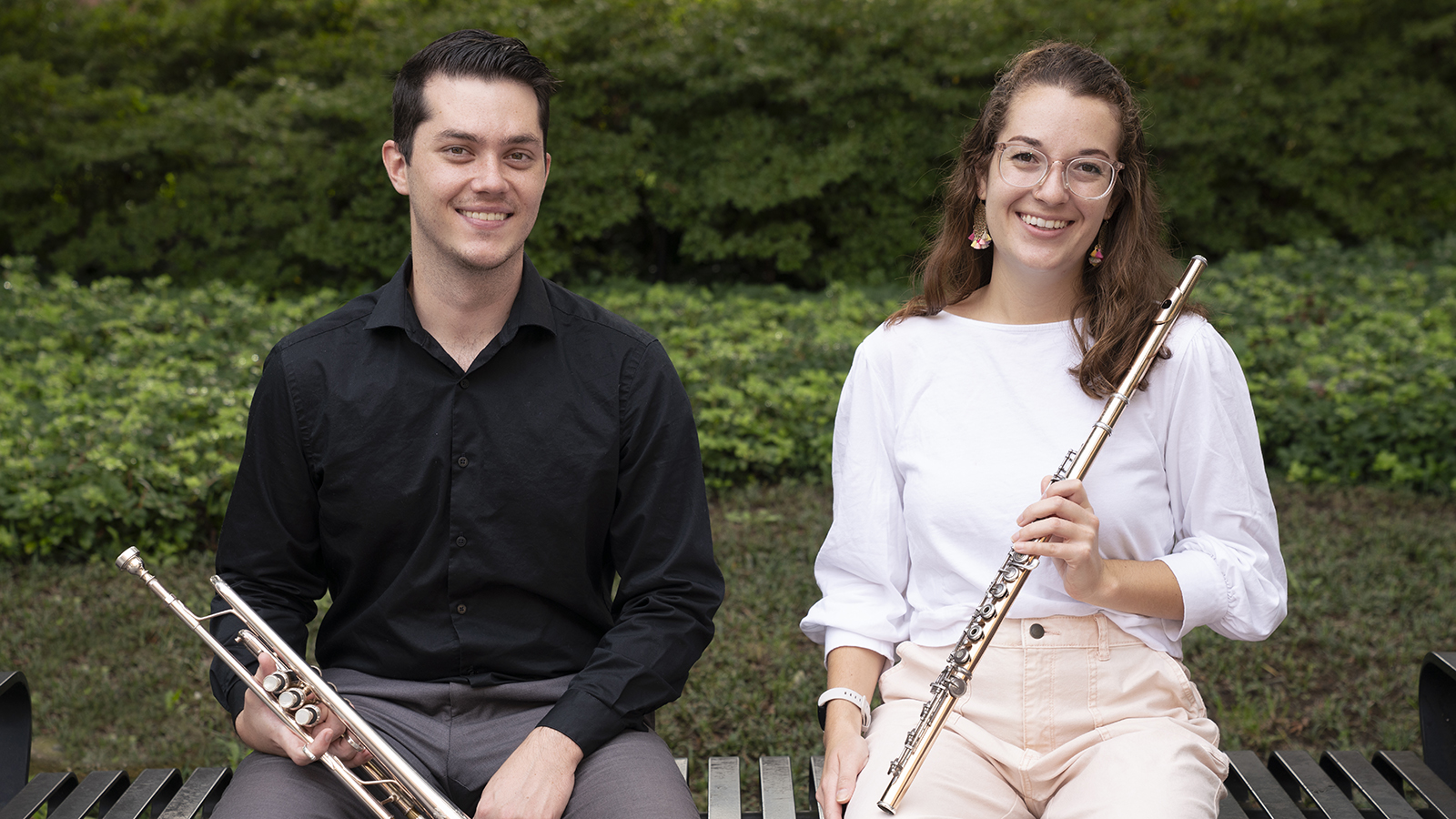 Rye and Lewis are the 2021–22 artists-in-residence at Collington, through a program which places two SOM graduate students rent-free in the retirement community in exchange for performing and coordinating regular musical and educational programming for the senior residents. Now in its fifth year, the program has garnered national attention.

The pair have been living among the residents at Collington since the end of August, and they recently kicked off their residency with a welcome recital and meet-and-greet. 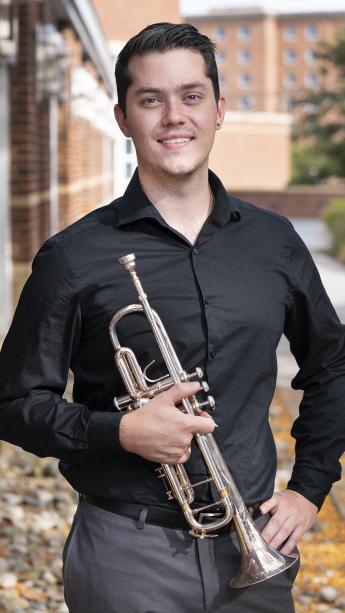 Rye, who is studying trumpet, said that he was drawn to this residency opportunity in part due to his past experiences performing at Collington as a guest. “The residents here are the most receptive audiences that I’ve ever played for,” he said.

SOM Director Gregory Miller said that both the students and the residents “gain so much” from this program. The students learn from the decades’ worth of experiences that the seniors share and develop their skills in programming concerts and coordinating guest musician and speaker visits, he said.

“The continued success of this cross-generational partnership has grown out of the community that the students and residents build together around a mutual love for music,” Miller said. “This has become even more essential as we continue to navigate this ongoing pandemic without losing meaningful social connection.”

At their debut recital, Lewis and Rye performed works from a range of genres and eras, from duets by Telemann and Mozart to jazz pieces and modern solo compositions featuring extended instrumental techniques. Residents were invited to attend in-person with masks, but also had the option to tune in remotely, either through the Collington Artists-in-Residence Facebook page or through the facility’s internal television channel. 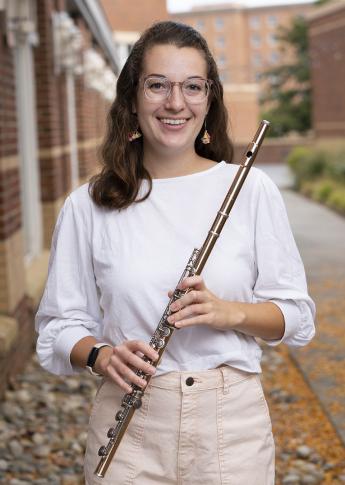 Lewis, a student of flute, said she appreciates how open the Collington residents are to such a wide range of musical genres and topics.

“It’s really rare as performers that you walk into a performance knowing that whatever you decide to play, the audience is going to enjoy it,” she said. “It’s a great place to experiment.”

Collington resident Marilyn Haskel, a professional musician who is retired from an extensive career in liturgical music, said that this partnership with the SOM is something that the residents greatly enjoy.

“The presence of the University of Maryland students on Collington's campus is a plus for all of us here for many reasons,” Haskel said. “We can learn about ‘new’ composers we've never known until now, we hear innovative programming and lectures that are engaging, and we can interact with young adults who bring a fresh perspective on life. It's all a plus.”

Rye grew up in Virginia and attended James Madison University for his Bachelor of Music. He continued his studies at the SOM, where he received a Master of Music. An active chamber musician, he frequently performs in a variety of brass ensembles throughout the Washington, D.C., area. He currently serves as an adjunct instructor at Nova Southeastern University and coaches young musicians in the Maryland Classic Youth Orchestras at the Music Center at Strathmore.

Originally from New York, Lewis earned both a Bachelor of Music Education and a Master of Music in flute performance from Ithaca College. A versatile performer, she has won positions with the Catskill Symphony Orchestra, the Cayuga Chamber Orchestra and the U.S. Air Force Academy Band. Lewis is also a development director at Sound Mind, an organization that aims to end the stigma surrounding mental health in the classical music field.

The artists have several plans in the works for their time at Collington, including educational programming and recitals featuring jazz and pop standards.

In addition to these formal presentations and performances, the duo has already found it “really rewarding” to collaborate with the residents at Collington, many of whom are lifelong musicians themselves, Rye said. The residents have organized a number of their own musical groups, including a jazz combo they call the Kollington Kats.

Following their welcome recital for residents, a number of residents reached out and expressed their interest in making music with the pair.