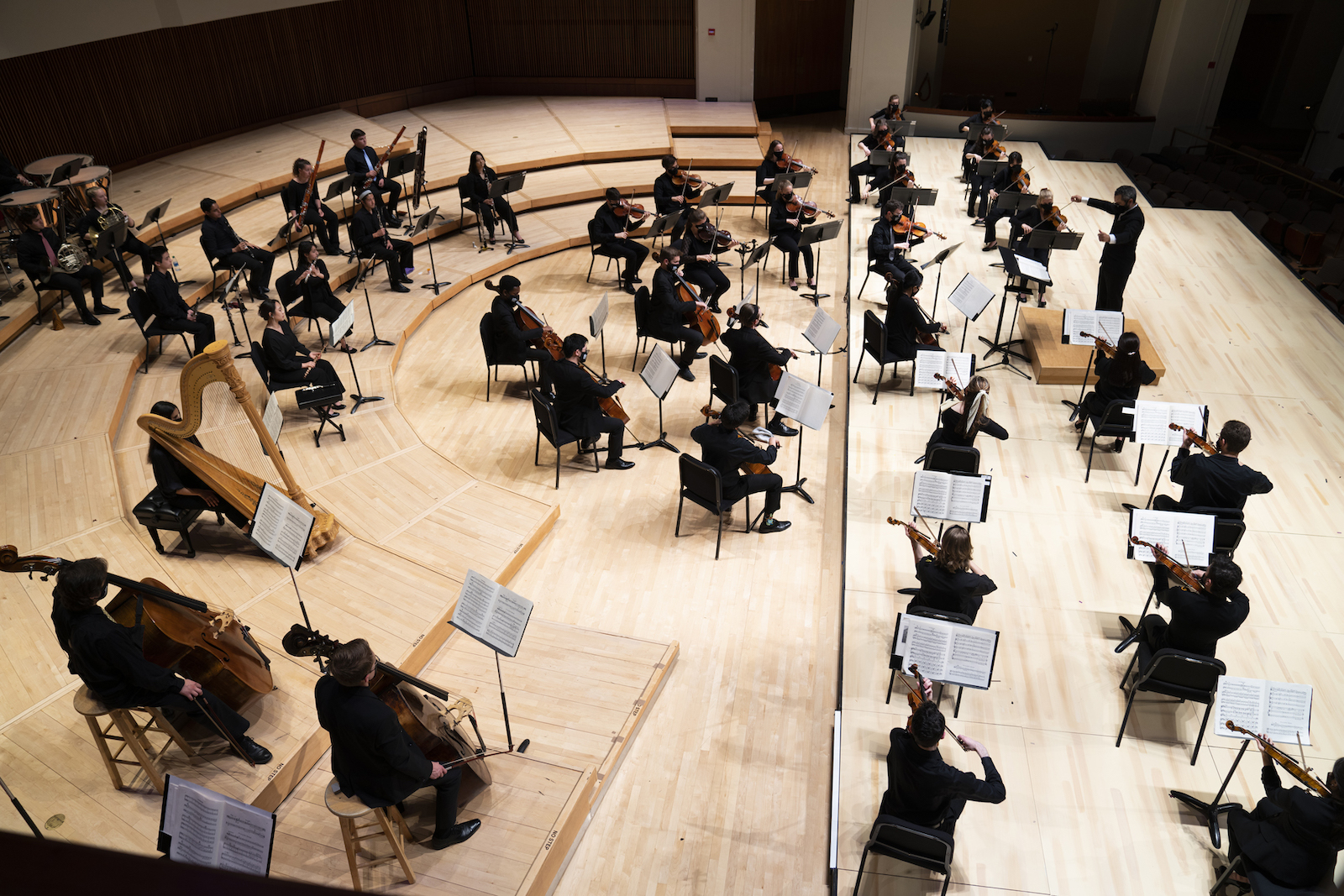 An unfamiliar but welcome sound is percolating in The Clarice Smith Performing Arts Center this summer: live music.

After 15 months of hosting virtual concerts during the COVID-19 pandemic, the venue is again home to an in-person National Orchestral Institute + Festival (NOI+F). The annual program has convened over 100 of the nation’s top young orchestral musicians, music faculty and conductors for a month of music-making and performance. Most had been starved of such opportunities for more than a year, and described the experience as joyful, if surreal.

“It’s a very liberating feeling,” said Kenneth Slowik, a faculty member in the University of Maryland’s School of Music and artistic director of the Smithsonian Chamber Music Society, who made his NOI+F conducting debut on Saturday.

“It feels like a weird dream,” said Kaitlyn Knudsvig, a violinist who graduated from the University of Rochester’s Eastman School of Music in 2020. “Everyone is just having the absolute time of their lives.”

Now in its 34th year, NOI+F provides a month of rehearsals, masterclasses, seminars and performances. Participants, who are current college students or recent graduates, stay on the UMD campus and work closely with faculty from leading North American symphony orchestras and conservatories, as well as renowned conductors. Marin Alsop arrived this year as NOI+F’s first-ever music director.

Last summer, a reimagined “NOI+F at Home” had participants continue their orchestral training virtually. But when COVID-19 showed signs of slowing earlier this year, NOI+F Director Richard Scerbo began to explore the possibility of returning to in-person instruction in Summer 2021. Staff at The Clarice consulted the UMD Health Center and others in the field to explore best practices for rehearsing and performing safely.

“We felt we had a duty and responsibility to do our best to create this impactful experience for students—and do it safely,” Scerbo said.

After months of planning, this year’s institute and festival feature new protocols including a rigorous COVID-19 testing schedule, a physically distanced orchestra, an enlarged performance stage and increased air flow in musical venues. Audience numbers have been cut back, and those in attendance sit in pods and wear masks. All concerts are also available virtually via livestream.

Director of Operations for The Clarice Ryan N. Knapp said it’s been “very rewarding” to work with his team to create the infrastructure for a live, in-person experience.

“We basically created a brand-new festival, a brand-new project, from scratch,” he said. “There were so many unknowns, and the rules and guidelines were constantly changing. I’m now certain there is nothing that our team can’t accomplish.”

Throughout the pandemic, Knapp has been at the helm of keeping much of The Clarice’s programming accessible through virtual means. But watching an audience engage with music in-person has no comparison, he said. During the intermission of a recent NOI+F performance, he said he marveled as audience members seemed to “buzz” in the lobby.

“You could see in the way they walked, the way they talked to each other, that they were energized, that they were feeling back in the mix of it, back to what makes them happy,” he said. “There’s no real interpretation of how something translates to the audience without them being physically present.”

Acting Executive Director of The Clarice Erica Bondarev Rapach said that also makes for an enhanced educational experience for performers.

“There’s so much to be learned from being an artist on stage responding to a live audience and seeing them and hearing their applause,” she said. “It’s about feelings and emotion, about being human beings and having a shared experience, a collective moment of artistic expression that can’t be defined in words.”

Knudsvig, the violinist, said it was challenging to spend so many hours alone in a practice room. Her last concert before quarantine was March 13, 2020.

On a recent Friday evening, during the opening NOI+F concert, she was a concertmaster as the orchestra played works by Mozart, Haydn, Still and Korngold before an audience of 100 or so patrons.

Though she was nervous before the show, Knudsvig said it was enthralling to be on stage after so long, moving with the music and making eye contact with and smiling at her fellow musicians—even through masks. And when it ended, the orchestra got a standing ovation.

Read this story in Maryland Today.