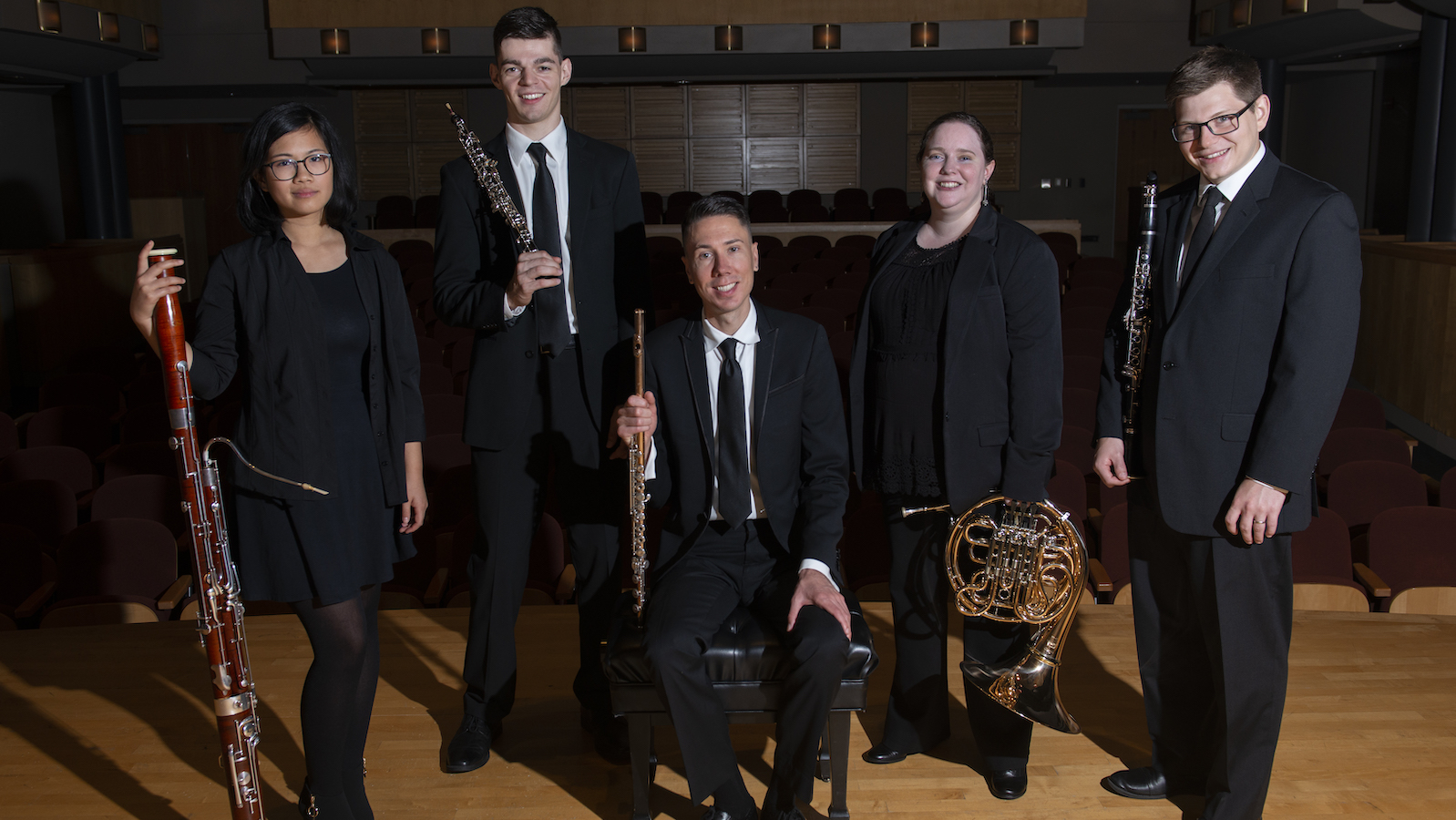 As a newly formed group, the members of Oculus [Five] look forward to developing professional and personal relationships within the School of Music and with their audiences through outreach performances in the DMV area and on campus.

Oculus [Five] looks forward to cultivating their professional lives among friends and community members alike during their two-year fellowship. The newly minted group plans to become more intimately involved within the School of Music and beyond through its recitals on campus and outreach programs in the schools. Each member brings unique musical backgrounds to the table, and are all excited to embark upon this journey together as they pursue their graduate degrees at the University of Maryland School of Music.

Thomas J. Wible (D.M.A. flute) maintains an active career as a chamber musician and teacher in the DMV area. He is currently a second-year doctoral student at UMD where he studies flute with Sarah Frisof. Thomas recently completed a three-year position with The Orchestra Now, performing regularly at Carnegie Hall, Lincoln Center, the Met and other venues across NYC.

Patrick Grimone (M.M. oboe) hails from Cleveland, Ohio, and is pursuing a master’s degree in oboe performance studying with Mark Hill. He holds a bachelor’s degree from the Cincinnati Conservatory and has performed with the Kentucky Symphony Orchestra, the American Wind Symphony Orchestra, OperaMaya Festival and the Sewanee Music Festival.

Michael Casto (D.M.A. clarinet) is originally from Bowie, Maryland. He is an active performer and teacher in the DC and Baltimore areas. He has served as 2nd and Solo E-flat Clarinetist with the Evansville Philharmonic and has been a substitute with the New World Symphony as well as the Terre Haute Symphony. He is a student of Robert DiLutis.

Molly Flanagan (D.M.A. horn) is from Philadelphia, Pennsylvania. She holds degrees from Boston University and the Guildhall. As a freelancer, she has subbed in groups like the Jacksonville Symphony, the Atlantic Classical Orchestra and the Florida Grand Opera. She is a student of Gregory Miller.

Debra Loh (M.M. bassoon) is from Portland, Oregon. She is pursuing her master’s degree in bassoon performance as a student of Joseph Grimmer. She holds a bachelor's degree from the Eastman School of Music and has attended festivals including the National Orchestra lnstitute + Festival and Eastern Music Festival.

Oculus [Five] looks forward to sharing their musical talents and enhancing the musical arts community on campus and around the University of Maryland. Please join them for their season of performances in the area and at The Clarice including the group's debut recital “From Square One” on November 13, 2019.