A Symphony on the Streets

October 18, 2021 College of Arts and Humanities | School of Music 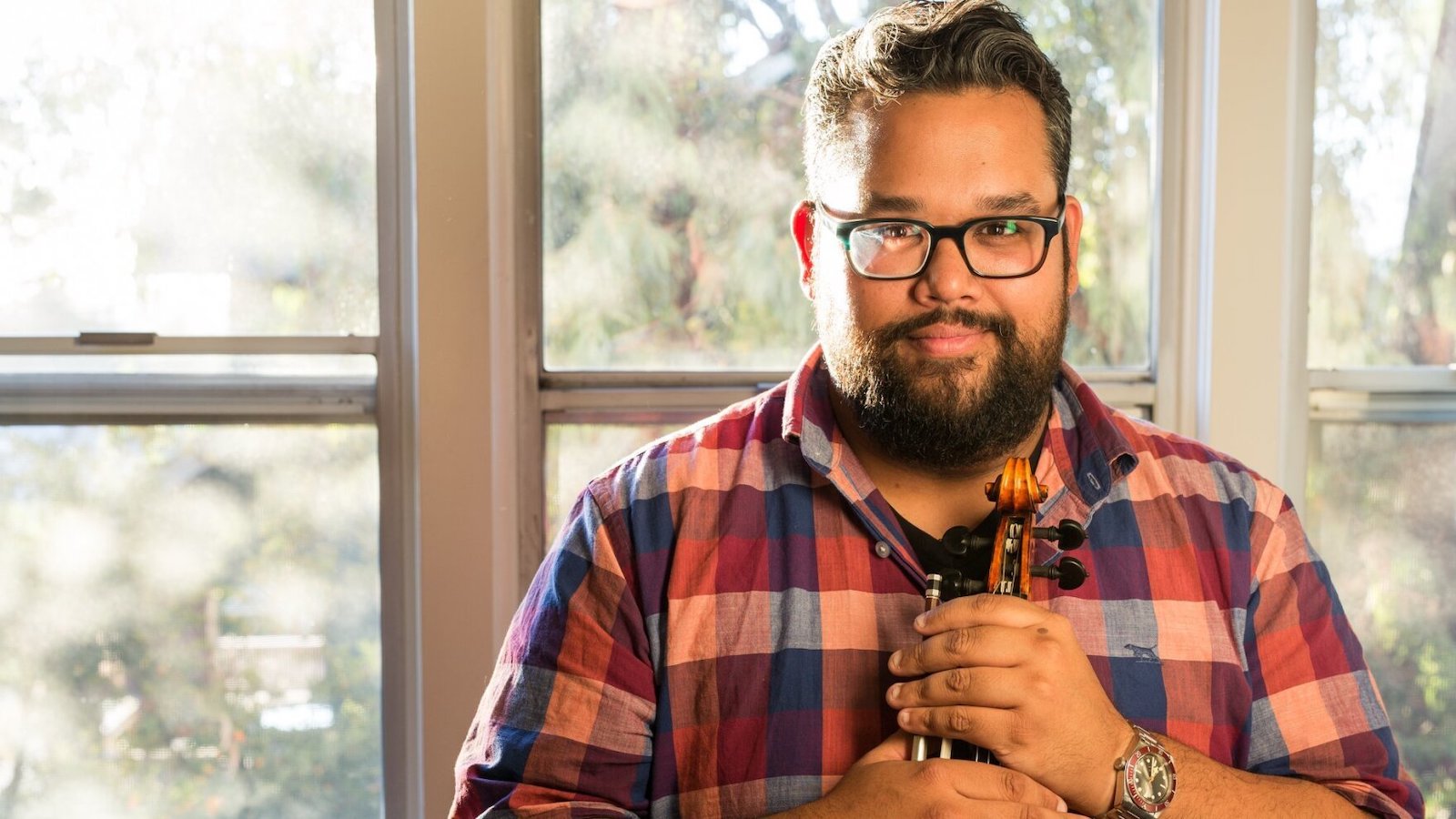 In late 2009, violinist Vijay Gupta got a call from L.A. Times journalist Steve Lopez. Gupta, then 21, had two years earlier become the youngest ever member of the Los Angeles Philharmonic, one of the world’s preeminent orchestras. Now a friend of Lopez’s named Nathaniel Ayers wanted a lesson.

Ayers, a talented musician in his own right, had been diagnosed with a severe mental illness and ended up homeless on the streets of Los Angeles. He was the subject of Lopez's bestselling book “The Soloist” as well as a subsequent movie starring Robert Downey Jr. as Lopez and Jamie Foxx as Ayers.

Gupta had never taught before, but he didn’t hesitate. He began visiting Ayers in Skid Row, the largest community of unhoused people in the United States, where the two Juilliard-trained musicians bonded over Beethoven, scales and technique.

Gupta also wondered how many others in Los Angeles’ homeless population were like Ayers—brilliant and talented but disenfranchised due to mental illness, addiction or simple bad luck. Gupta didn’t know how, but he knew he wanted to offer music to Skid Row.

A year later, Gupta founded Street Symphony, a nonprofit that brings music to homeless and incarcerated communities in Los Angeles through workshops, events and educational opportunities. He is also a co-founder of the Skid Row Arts Alliance, a consortium of arts organizations made up of people living and working in Skid Row. For his work “bringing beauty, respite and purpose to those all too often ignored by society,” Gupta was the recipient of a 2018 MacArthur Fellowship.

Ten years since its founding, Street Symphony’s roster of artists—made up of professionals and community musicians—now numbers 90. They’ve presented some 1,200 events, reaching well over 10,000 people. Gupta, who left The Los Angeles Philharmonic in 2018 to devote himself to Street Symphony, seeks to share widely his message that art is an offering of love, justice and connection that has the power to heal entire communities. To date, his TED Talk, “Music is Medicine, Music is Sanity,” has garnered millions of views.

Under the banner of Arts for All, a campuswide initiative leveraging the combined power of the arts, technology and social justice to address the grand challenges of our time, Gupta will speak Thursday at The Clarice Smith Performing Arts Center as part of the 2021–22 Arts and Humanities Dean’s Lecture Series. But before that, he talked to us about his journey to activism, learning from those he serves and the responsibility of the artist to work for justice.

You’ve performed as an international recitalist, soloist, chamber musician and orchestral musician for over 20 years. But you also studied biology in college, and are now a nonprofit leader. How do you manage being so multidisciplinary?

I feel like my role as an artist, as a citizen, as a nonprofit leader, as a spouse, all comes back to finding the truth. And the iterative process of applying oneself to a question to find the truth, and trying something and failing at that something, is both scientific and artistic and a deeply spiritual pursuit. I would love for us to throw away externally imposed certificates of expertise and rather think about multidisciplinary connections of gifts, because that places us into the framework of curiosity. Whether it’s an artistic pursuit, a scientific pursuit, a relationship, an act of civic engagement—I think we always need to stay curious.

You started Street Symphony at the age of 22 while a musician in the Los Angeles Philharmonic. How did you do that?

After I met Nathaniel I knew there was a possibility there could be other people like him out there, but I didn’t know how to reach them. So, I just started cold calling people. And there was a lot of failure. I called hospice workers who thought I was a prank caller. I called a lot of people who didn’t take me seriously. Eventually I started calling social workers working for Skid Row and they said “Yes, we’ll set aside our lunch hour and get an audience together and have a concert.” And my colleagues in the Philharmonic really rose to the occasion and they went with me. I didn’t start Street Symphony alone, I was never alone in this work. I had colleagues who gave their hearts, talents and gifts continuously with very little expectation of anything in return. And there was never an idea to create a nonprofit. Somebody handed me a check at a TED conference. I didn’t know what to do with the money so that’s when I thought to start a nonprofit at least to have the money in a bank account.

How would you recommend people begin to make a difference in their own communities?

The first thing you need to do is to take inventory of your gifts—what feels good and what you love. Basically, what makes you come alive? The second step is to find a way to apply that in the world—any way. If you like it when someone laughs, then make a daily practice of making somebody laugh. Find a way to give and receive what makes you come alive. Third, create a lab. Find your peers, find your tribe, who are willing to ask questions and apply them in the world in a similar way. Fourth, offer it to the world. Show up with curiosity and not with judgement, and serve. When we take these four steps, we’re identifying our values. If you start with your values—your why—the how and the what will come next.

What do you feel like you and your fellow professional musicians have learned through this decade-long interchange of ideas?

That there is more that is similar about us than is different. The conversation around service and engagement and outreach often has this pernicious myth around the redemption story, that we can save people. And I feel like that’s a perfectly fine place to start but it becomes hubristic if that’s our only motivation, because it maintains a separation of us and them. Even if we’re showing up out of charity it could still be in the mode of judgment and not in the mode of curiosity. It could still be in the mode of expertise and not experience. So, I feel like I have thrown every bit of dogma or rule or some judgments I’ve had about “those people” out. I’ve also learned from my colleagues in Skid Row that we don’t have to let the worst thing that’s happened to us define us. Forgiveness is choosing to take our identity from something more than the wound. We really do get to choose our lives. We really do get to choose our perception and the way we go about paying attention to the world.

Do you believe artists have a unique responsibility to engage in social justice work?

Gupta will be at The Clarice Smith Performing Arts Center October 21, 2021 from 5:30-7 p.m. Reserve tickets here. He will also sell and sign copies of his recent album “When the Violin” in the lobby after the event. This event is co-sponsored by the School of Music.