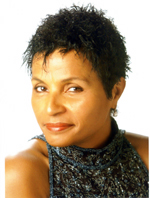 Professor Carmen Balthrop passed away on September 5, 2021, at age 73 following a yearlong battle with cancer. Visit the UMD School of Music's In Memoriam to her life and legacy.

Balthrop made her Metropolitan Opera debut as Pamina in Mozart's Die Zauberflöte, having been the last of the first place winners in the Metropolitan Opera National Competition in New York. Acclaimed by The Washington Post as “electrifying... a consummate performer,” by The New York Times as “a voice of power and uncommon tonal purity” and “a rapturously beautiful voice” by The Miami Herald, this American soprano has an astonishing range of repertoire from Baroque opera and song to contemporary literature. She has performed leading roles with some of the world's major opera companies and symphony orchestras, including the Metropolitan Opera, San Francisco Opera, Houston Grand Opera, Washington Opera, Canadian Opera, Deutsche Oper (Berlin), Teatro La Fenice (Venice), the New York Philharmonic, the Boston Symphony, Pittsburgh Symphony, San Francisco Symphony, Los Angeles Philharmonic and the National Symphony. Among her signature operatic roles are: Cio-Cio-San in Madama Butterfly, Violetta in La Traviata, Micaela in Carmen, Liu in Turandot, Donna Elvira in Don Giovanni, Poppea in L’Incoronazione di Poppea by Monteverdi and Susannah in Susannah by Carlisle Floyd. Her historical Broadway debut was in the title role of Scott Jopin's opera Treemonisha.

While her international appearances have taken her to concert halls in Austria, Amsterdam, the Bahamas, China, Mexico and Russia, in the United States, Balthrop has performed recitals in the White House, Carnegie Hall and the Kennedy Center. Her Christmas art song recital, recorded live and performed at the National Gallery of Art in Washington, D.C., was chosen to be aired on Christmas day (2000) by National Public Radio (NPR) as part of their Millenium celebration.

Her compact disc recordings entitled "The Art Of Christmas, Volume I" and "The Art of Christmas, The Original," heralded by the Washington Post as “a must have on everyone’s Christmas recording list,” are available at amazon.com and cdbaby.com. Balthrop regularly collaborates with living composers including Dominick Argento, Leslie Burrs, Frank Proto and Robert Greenleaf among others.

Balthrop has been inducted into the University of Maryland’s Alumni Hall of Fame and was formerly the School of Music's associate director for academic affairs & undergraduate studies and the coordinator of the Voice & Opera Division.