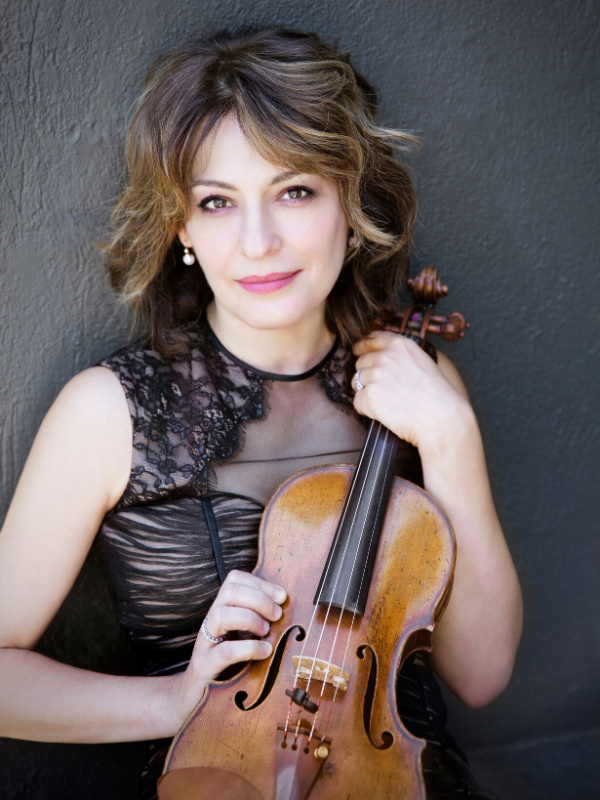 On Sabbatical for the Fall 2021 and Spring 2022 Semesters

“…a gigantic spitfire of a player. She tears into the most difficult passages with relish and pristine execution. Even the most mundane passages bristle with excitement in her hands.” -TheaterJones.com

“Four Strings Around the World” “On all levels, a very impressive release. -Limelight–Australia’s Classical Music and Arts Magazine

“…quite stunning… …one of the best solo CDs I’ve heard.” -The Whole Note

Internationally renowned Romanian violinist Irina Muresanu continues to stretch the boundaries of classical music. A sought-after soloist and chamber musician who has appeared throughout the United States, Canada, Europe, Asia and South Africa, Ms. Muresanu has also developed a reputation as a compelling and elegant interpreter in the contemporary music world. Acclaimed for her elegant, passionate performances, her concerts have frequently been cited by The Boston Globe as among the “Best of Classical Music Performances.”

Following summer engagements throughout New England, France and Florida, including performances at Mahaiwe Performing Arts Center (Great Barrington, MA) and the music festivals of  Halcyon, Meeting House Chamber, Newport, Berkshire High Peaks, and the Josef Gingold Chamber Music Festival of Miami, Fetes Musicale de Corbigny and with the Plymouth Philharmonic (MA), Muresanu's 2019-20 season features a mix of contemporary pieces and war horses, including the music of American composer Jay Reise, Bruch, Prokofiev, Pärt, Enescu, Mozart, Berio, Beethoven and more. She appears in concerts in Washington, DC, Texas, New York, Pennsylvania, Massachusetts, Rhode Island, Maryland, and Illinois. In addition to concerto appearances with orchestras, including with the symphony orchestras of Allentown (PA), Evanston (IL), Claflin Hill (MA), and Symphony by the Sea (MA), Ms. Muresanu can be heard in duo-recitals and in chamber music, including performances with her ensemble, the Boston Trio.

Ms. Muresanu begins the 2019-20 season with a performance of “Four Strings Around the World,” her acclaimed multi-media program of global resonance celebrating the diversity of cultures through the unifying voice of the solo violin, at the Romanian Embassy in Washington, DC. The first of three performances this season, she also performs “Four Strings” at Hobart and William Smith College (NY) and on the Kalliroscope Gallery Series (MA).

Begun in 2013, “Four Strings Around the World” includes composers from four continents with works inspired by the folk music of Eastern and Western Europe, the Middle East, Asia, and South and North America. It has evolved not only into a touring program, but a VR (Virtual Reality) project and recording as well. Released as a solo violin CD in 2018 by the Grammy-nominated Sono Luminus label, the CD has been called an "illuminating release" by The Boston Globe. It features such renowned works as Niccolò Paganini's Caprice No. 24 and J.S. Bach's Chaconne in D minor, and also commissioned new works, including Indian composer Shirish Korde and Native American composer Jerod ‘Impichchaachaaha’ Tate.

Ms. Muresanu is an avid performer of new music, especially by American composers. Recent recordings include Thomas Oboe Lee’s Violin Concerto (dedicated to Ms. Muresanu) on the BMOP label, and works by Elena Ruehr  for the Avie Records CD “Lift,” included on Keith Powers’ 13 Best Classical Music Recordings of 2016. She has also recorded the complete William Bolcom sonatas on the Centaur label with pianist Michael Lewin, funded by the Copland Recording Grant, and the Guillaume Lekeu and Alberic Magnard late Romantic Violin and Piano Sonatas with pianist Dana Ciocarlie for the French label AR RE-SE (“singing and soaring…[a] sizzling performance.” Fanfare). Of note among numerous additional recordings is the world premiere recording of Marion Bauer’s Sonata for Violin and Piano with pianist Virginia Eskin for Albany Records.

Irina Muresanu is a strong proponent of music education. She is an associate professor at the University of Maryland and has taught at Boston Conservatory and in the Harvard and MIT Music Departments.

Born in Romania, Ms. Muresanu holds a prestigious Artist Diploma degree and a Doctor in Musical Arts degree from the New England Conservatory. She plays an 1849 Giuseppe Rocca violin with an Etienne Pajeot bow.

Muresanu teams up with pianist Valentina Sandu-Dediu for this album, which features music for violin and piano and for solo violin by Romanian composer Dan Dediu (b. 1967). Dediu's compositions feature a process he calls ‘hybridisation,' in which he combines pieces of existing music to create a new and individual work. On this album, Don Giovanni/Juan "SonatOpera," op. 53 is an example of this, combining elements of Mozart and Strauss. Both the "SonatOpera" and "A Mythological Bestiary" were written for and premiered by Muresanu and Sandu-Dediu.