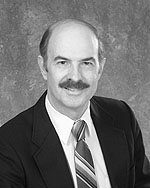 Born in Long Beach, California, Mark Edwards Wilson received a Ph.D. in composition at UCLA where he studied with Henri Lazarof, Roy Travis, Roy Harris and Leon Kirchner. Wilson's compositions range from orchestral and chamber music works to electroacoustic and multi-media works and have been performed extensively worldwide.

Wilson's orchestral work, The Phoenix, was chosen as the Grand Prize Winner of the Realize Music Challenge, an international competition for new orchestra music sponsored by Notion Music, Inc. and the London Symphony Orchestra. In a press release, acclaimed American composer John Corigliano, who headed the judging panel, has written the following of the winning composition: "Excellent piece. It really develops its materials and has a fine, large shape. I felt a true symphonic mind at work. Beautiful orchestration, too. Bravo!" As part of the prize, The Phoenix was recorded at Abbey Road Studios by the London Symphony Orchestra, Jack Jarrett conducting. Last season, The Phoenix received two performances by the Austin Symphony Orchestra, Peter Bay conducting, as part of the ASO's Centennial Celebration.

Of Wilson’s solo works and chamber music compositions, Metamorphosis (a string quartet premiered by the Left Bank Quartet at the Kennedy Center), Soliloquy (a work for violin written for David Salness) and Rituals (a work for piano commissioned by the William Kapell Competition) have been extensively performed in America, Europe and Asia. His composition Aeolus (an electroacoustic work for flute) has received more than 100 performances worldwide by various artists. Another electroacoustic work, Sappho, was premiered and recorded for release on the Capstone label by internationally acclaimed soprano Phyllis Bryn-Julson. Wilson's most recent recordings are of Windows (an electroacoustic composition), released on the Neuma label in 2006 and a 2008 release on Capstone Records entirely dedicated to his compositions, ranging from solo and chamber music works to a composition for chamber orchestra, Ancient Ways, featuring the Hollywood Chamber Players conducted by the composer.

Earlier in his career, in conjunction with his work at UCLA, Wilson was active in the world of music for film and television and received the Henry Mancini Prize and the Mancini Production Award for film scoring.

Wilson's most recent work has centered on compositions for orchestra. Of these, Delphi (2005) has been recorded by the Kiev Philharmonic. His latest works for orchestra, Oracles (2006) and The Phoenix (2008) were written for and premiered by the University of Maryland Symphony Orchestra, James Ross, conductor. His work in the orchestral medium has received numerous awards and distinctions including three commissions from the Long Beach Symphony Orchestra (Four Sketches of Notre Dame de Paris, Gethsemane and Morpheus) and a commission by the Chamber Symphony of St. Louis for Ancient Ways. His orchestral work Morpheus received First Prize in the Haubiel New Orchestral Music Competition.

Wilson has received numerous honors and prizes in the field of composition, including the Harold Springer Award for Music Composition, seven Creative and Performing Arts Awards from the University of Maryland, two Maryland State Arts Council Fellowships and the BMI Award (Broadcast Music, Inc.).

A performance of Wilson's The Phoenix by the London Symphony Orchestra: