The three Asian music ensembles are an integral component of our ethnomusicology program. These ensembles enable students to study music from Bali, Japan and Korea.

Under the direction of I Nyoman Suadin, the UMD Balinese Gamelan Saraswati ensemble includes students from the School of Music and beyond. The ensemble takes its name from Saraswati, the Hindu goddess of knowledge and the arts. The gong kebyar style instruments, which were acquired in 2001, were built by I Wayan Beratha, a leading instrument maker, composer, performer and teacher in Bali. There are two public performances each year.

UMD Balinese Gamelan Saraswati sometimes has the opportunity to perform with locally based Gamelan Mitra Kusuma. Founded in 1997, Gamelan Mitra Kusuma brings together individuals from the Maryland, Virginia and Washington, D.C. communities who are devoted to the study and presentation of the music and dance of Bali. The name Mitra Kusuma means "Flowering Friendship," which describes the spirit of this group. This partnership with the professional group gives our students the opportunity to learn from and cultivate relations with the musicians and dancers.

Under the direction of Kyoko Okamoto, the UMD Japanese Koto Ensemble is made up of both graduate and undergraduate students. Koto courses are designed to allow students to experience Japanese cultural aesthetics as exemplified in the traditions of koto and shakuhachi music. Other instructional activities have included lectures and discussions, Japanese dining and viewing of films and live performances presented by professional musicians.

The UMD Japanese Koto Ensemble performs each semester. The spring concert is a joint venture with the Washington Toho Koto Society, a nonprofit group of koto players and friends, primarily from the Washington, D.C. metropolitan area. Founded in 1971 by Kyoko Okamoto to promote the understanding and appreciation of Japanese koto music, the society participates in many national and local community events, including the Lantern Lighting Ceremony, which traditionally opens the National Cherry Blossom Festival each spring.

The UMD Korean Percussion Ensemble was formed in 2009 under the direction of Sebastian Wang and is one of the first of its kind in the United States. The ensemble learns and performs Korean percussion music from traditional p'ungmul farmers' bands music and contemporary samulnori pieces. Samulnori is a modern incarnation of traditional Korean folk music that celebrates harvest time and provides a lively soundtrack to dancing. The ensemble is comprised of four types of percussion instruments — an hourglass drum, a barrel drum, a small gong and a large gong, each representing a natural element: rain, clouds, lightning and wind, respectively.

The UMD Korean Percussion Ensemble often performs with members of Washington Samulnori, the professional samulnori ensemble formed and directed by Sebastian Wang. This ensemble hopes to promote and teach samulnori music, prolonging and protecting this genre's future in the United States. 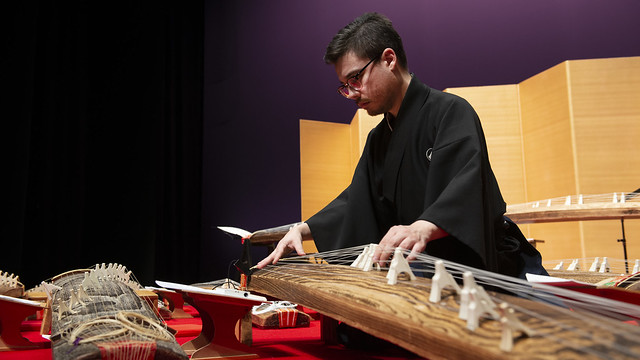