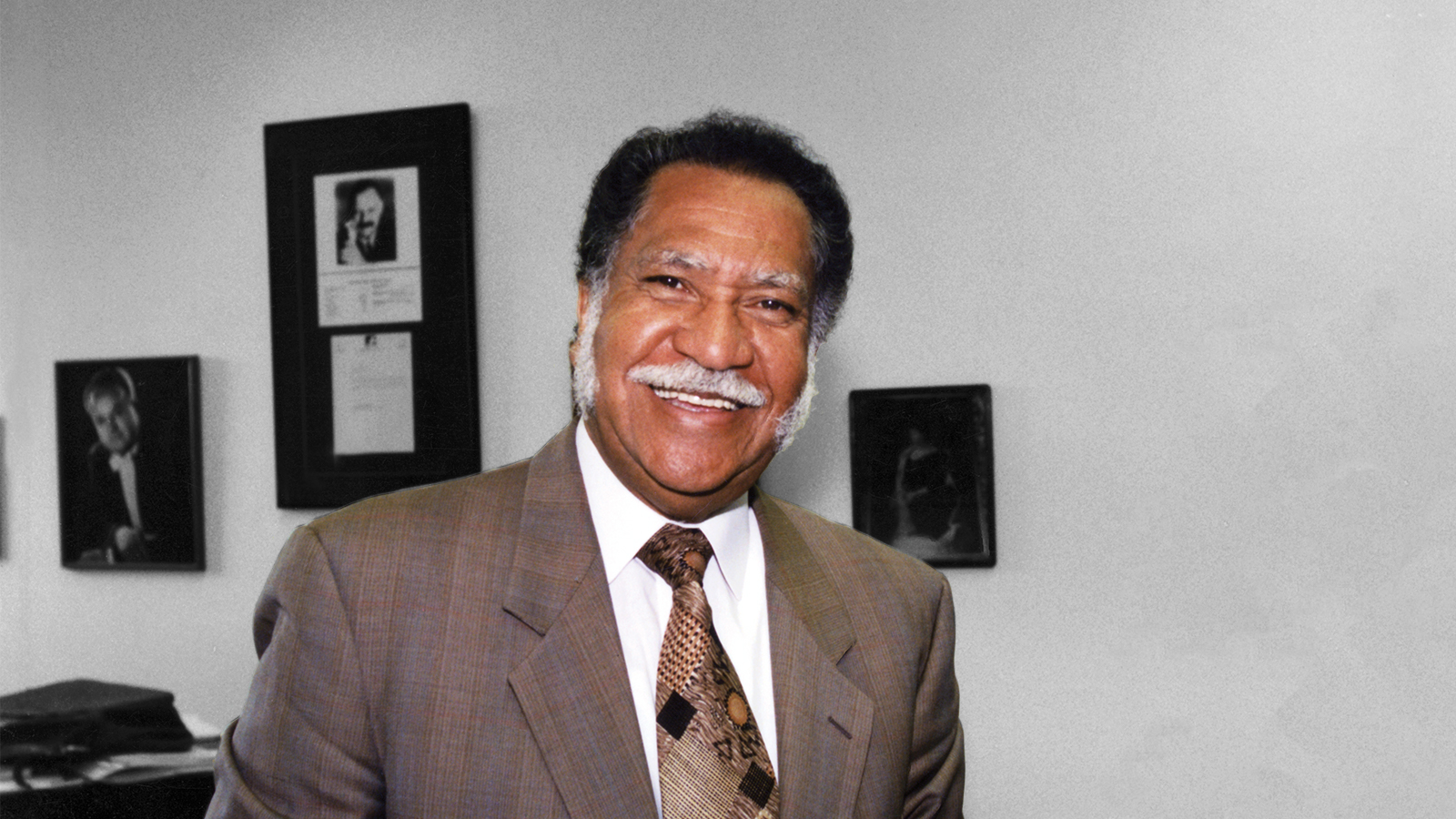 Professor Emeritus leaves a lasting legacy after 25 years at UMD.

Cleveland Page, professor emeritus at the University of Maryland (UMD), passed away peacefully in his home on April 23, 2020. He was 86.

A piano professor in the university’s School of Music (SOM) for 25 years, and head of the Piano Division for over a decade, Page was instrumental in elevating the piano program at Maryland into the renowned and competitive program it is today—a program that nurtures talented pianists from across the state and around the globe.

As head of the program, Page expanded its faculty and oversaw the purchase of 103 Steinway pianos in time for the opening of SOM’s new home in The Clarice Smith Performing Arts Center (The Clarice) in 2001. This record-breaking purchase made UMD one of the first designated “All Steinway Schools.” 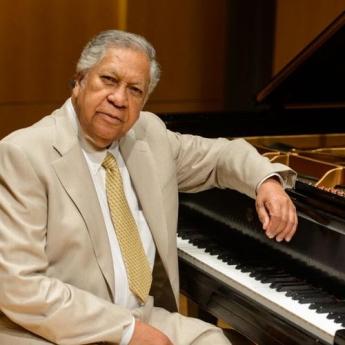 Under Page’s leadership, the Piano Division took a trip to Steinway’s storied factory in New York City to audition the instruments and hand select the highest quality pianos for their teaching studios and the three concert grands used in the concert halls at The Clarice.

Combined with the expertise of the piano faculty, this commitment to having the finest instruments available put UMD on the map as one of the most desirable places to study piano in the country.

An expert in piano pedagogy, or teaching how to teach, Page authored three piano textbooks early in his career that garnered him a national reputation for their application in teaching group piano. The books provided teachers with a framework and techniques on how to teach piano skills to students in a systematic way.

“He taught me how to teach,” said his former student Dmitri Nazarenko ’03 D.M.A., who runs a competitive piano studio in Montgomery County, Maryland. “Dr. Page was generous with service, his time and his money. He was always doing quiet acts of kindness.”

Nazarenko didn’t know until after the fact, but Page had personally provided a $10,000 scholarship so that he could attend UMD to study with him.

Page was dedicated to ensuring that his students were supported and as prepared as possible whether that meant extending their lessons up to six hours, giving free lessons over the summer or having his students over to his home in Silver Spring, Maryland.

“There are so many stories of his kindness,” said alumni Matthew Bachman ’05, M.M. ’07, D.M.A. ’14, who is now a manager at Steinway Piano Gallery of Washington, D.C. “Any time he had a student who needed financial assistance to attend a festival, he made sure it happened—no questions asked.”

Bachman shared a story of when Page loaned another student one of his personal pianos so that he could practice at his home and not just the school. He then paid for that student to travel to Italy to attend the prestigious Busoni competition, only to surprise him there himself just before the event.

Page was born one of nine children in Mississippi in 1933 during the Great Depression. He grew up in poverty as an African American in the segregated South.

He studied music at Tougaloo College in Mississippi for two years before transferring to Talladega College in Alabama to receive his Bachelor of Music. With only an undergraduate degree, he started his first college teaching job at Tougaloo College where he taught music theory, music history and piano along with playing the organ for Sunday services.

He often shared the story of a defining moment at this step of his educational journey. In applying for graduate school to study organ, he was required to send an audition tape. Since Tougaloo only had an electronic organ, a colleague suggested that he make the recording on the organ at her church and arranged for special permission for him to play in the white-only institution.

While playing Bach’s Prelude and Fugue in C minor, he heard an intense banging on the front door of the church. Instead of stopping to see who was there, Page thought "you can't plow straight and keep a'looking back”—lyrics from the black spiritual "Hold On!”—and decided that he would continue playing and, if he were shot, would “strike one loud C-minor chord and die at the organ.”

Fortunately, nothing happened and no one entered the church, but it was an impactful moment of his life that he would look back on whenever he played Bach.

Page received his Master of Music and Doctor of Philosophy from the University of Michigan. He taught piano on faculty at Eastern Michigan University and the University of Cincinnati College-Conservatory of Music, where he also served three years as director of graduate studies and associate dean for academic affairs.

In 1992, his journey brought him to UMD, where he taught for a quarter of a century as a piano pedagogue and an expert on historical performance practice and piano literature. He presented masterclasses and papers at universities, conservatories and conferences all over the world.

In addition to being a fine pianist, he considered himself a keyboardist, or one who has mastered all keyboard instruments including the harpsichord and organ. But instead of referring to himself as a “professor of piano,” he preferred using the broader term “professor of music,” because of his dedication to and love for the broader artform.

Right before his retirement and unusual for someone at the end of a career, Page embarked on an ambitious research project to learn the complete Bach toccatas for keyboard.

A Baroque scholar, Page held a special place in his heart for Bach. Recording the master’s most difficult keyboard pieces to share with the world was a personal goal for Page ever since the day he recorded his organ audition in the white-only church.

Page retired as professor emeritus in 2017. In retirement, he stayed heavily involved at UMD, especially with piano recruitment.

"In getting to know Cleveland over the past few years, it was clear just how much he cherished his time here and how important it was to him to ensure that the stellar reputation of the piano program continued to grow,” shared SOM Director Jason Geary. “As a faculty member, he played a key role in maintaining the program's excellence, and his generosity in retirement further cemented that lasting legacy." 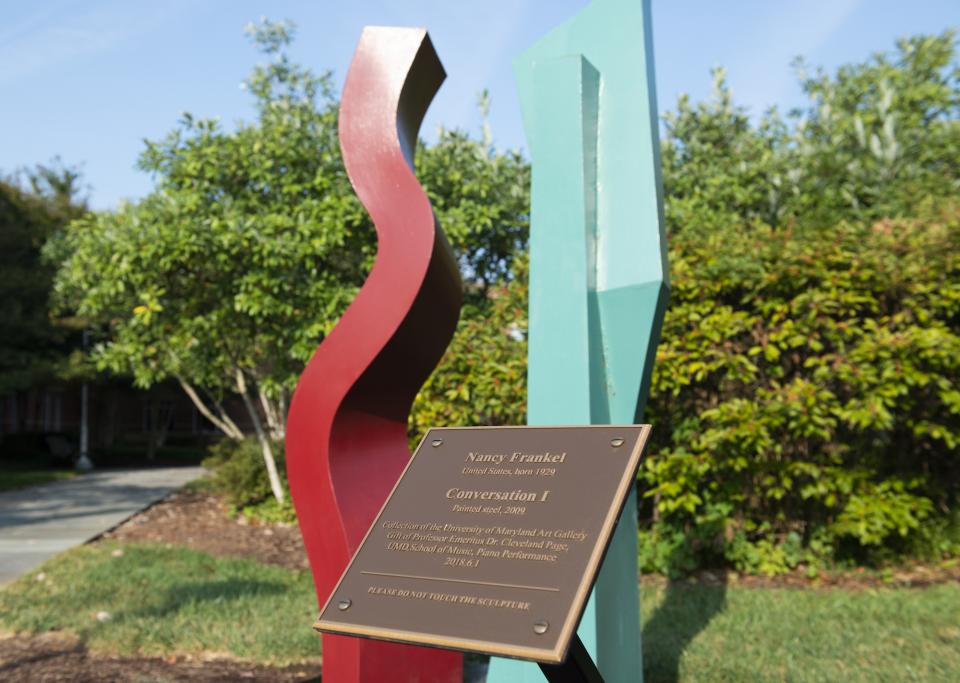 In 2018, he gave a $500,000 gift to establish the Cleveland Page Piano Faculty Endowed Fellowship for Excellence in Teaching, Performance and Recruitment along with a fine art sculpture that lives in SOM’s outdoor courtyard; in 2020, he gave a $25,000 gift for piano scholarships.

Two of his colleagues, piano professors Larissa Dedova and Rita Sloan, have already benefited from fellowship awards that are enabling them to make performance recordings of their own.

Dedova, who Page brought to UMD from the Moscow Conservatory, was a close friend and the inaugural awardee of the Page fellowship. Her project is to record the eleven completed Franz Schubert sonatas on five CDs.

“Cleveland’s passing is a huge loss,” said Dedova. “It was such a privilege to work with him. He was an amazing, wonderful man with a big heart. Music was his love, and I will remember him fondly.

Media credit from top to bottom:

Photo of Cleveland Page courtesy of the University of Maryland.

Photo of Cleveland Page at the piano courtesy of the UMD School of Music.

Photo of Cleveland Page and another pianist at the piano together. Photo by Alison Harbaugh.